The NFL has played Pro Football on Thanksgiving since 1920, although records indicate that “professional” football that pre-dates the NFL was played on Thanksgiving as early as 1892. We’ve pulled together some fun facts and history about the NFL’s traditional Thanksgiving Day Games that you may not have known.

If you are any kind of football fan, you probably already know that the NFL traditionally hosts Thanksgiving Day games in both Detroit and Dallas. Since 2006, there has also been a Thursday evening game played at various locations. (The 2020 night game was re-scheduled due to a covid outbreak) Here are some fun and interesting facts about the NFL’s holiday tradition:

Why do the Lions and Cowboys Always Play on Thanksgiving

The Detroit Lions began playing Thanksgiving Day football in 1934. Lions owner George Richards felt he needed a way to draw more attention to his team. Richards owned Detroit radio station WJR and worked a deal with NBC to broadcast the Lions Thanksgiving Day game across the nation. He also heavily promoted the game locally which resulted in a sellout. That 1934 game between the 10-1 Detroit Lions and the 11-0 Chicago Bears still holds the distinction of featuring the two teams with the most combined wins in a Thanksgiving game. Chicago won the game 19-16.

Cowboys owner Tex Schramm decided to play Thanksgiving Day games starting 1966. The event was a big success as they sold out the Cotton Bowl and a new tradition was born. The league replaced the Cowboys with the St. Louis Cardinals for a couple years in the mid-1970s, but the Cowboys returned to host in 1978 and have done so ever since.

It may seem like these often goofy awards have been around forever, but the tradition of a Thanksgiving Day award began in 1989. John Madden (then with CBS and later with Fox) began awarding the “Turkey Leg” to the player chosen as the MVP of the game. The initial recipient was Hall of Fame Defensive End Reggie White of the Philadelphia Eagles.

The Galloping Gobbler replaced the Turkey Leg in 2002. The Trophy has gone through a few changes since over the years. It initially consisted of a Turkey in a Heisman-Trophy-like pose.

The “Gobbler” later switched to a bronze-like statue of a Turkey with a football. In 2011, the look of the Galloping Gobler switched to a clear plaque with an engraved image of a turkey. There was a change in 2017 as CBS did not officially hand out an award and Fox merely awarded a “Game Ball” to Minnesota QB Case Kenum. NBC has not awarded any sort of trophy, but does announce a “Player of the Game.”

With the Cowboys trailing 23-3, unknown backup Clint Longley entered the game for the injured Roger Staubach and led Dallas to a 24-23 victory. On a snowy Thanksgiving day in Dallas in 1993, the Cowboys were clinging to a 14-13 lead with under 20 seconds left as Miami lined up for a game winning field goal try. After the Cowboys blocked the kick, apparently clinching a win, Leon Lett inexplicably slid into the football, making it a live ball which was recovered by the Dolphins. Miami made a field goal on the next play to win the game in a most improbable way. On the overtime coin flip, Bettis can be heard calling “Tails,” but the official claims he said “Heads.” Apparently, Bettis did say heads and then changed it to tails, but all you heard on the audio is heads. 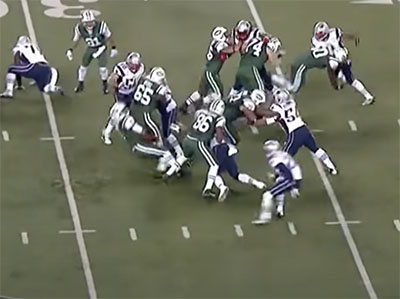 The NFL has produced a great video clip on the history of NFL on Thanksgiving that you can check out on YouTube.